We are happy to invite you to the Open Philosophy Seminar dedicated to representations of the Revolution and its ideas!

The significance of the French Revolution goes far beyond its practical political consequences: ideas of radical change born in that tumultuous decade have gained shape and weight, survived the trials of application – or were disqualified by them – and continue to haunt the imagination of historians, philosophers, politicians, and writers. The (re)conceptualization of the French Revolution is an ongoing practice: new meanings are assigned to it, old ones are contested, and through this process the preoccupations of its many interpreters are revealed.

Stanisława Przybyszewska’s Sprawa Dantona (1929) is one of the most compelling dramatic works on the topic produced in the twentieth century, largely unknown until the seventies; Andrzej Wajda’s film Danton (1983), adapted from the aforementioned play, is considered to be a gripping testament of the political situation in Europe at that moment. Both authors took the revolutionary ideas and shaped them in accordance with their respective visions of history and of the present day.

A film screening of Danton will be followed by a seminar discussion of what we do with ideas of the Revolution and how they are put to work. French revolutionary actors themselves were already adapting the teachings of the Enlightenment; Przybyszewska and Wajda, in their turn, looked back at this process from a historical distance that was both an advantage and an impediment, and used the channels at hand, textual and visual, to convey what they saw there. What do we in 2021, watching a 1983 film about the events of 1794, itself an adaptation of the 1929 play, make of all that? How do we consume the ideas of the French Revolution today and what does that historical event itself mean to us?

NB! Registration to the event is obligatory. Please, fill in the form: https://forms.gle/9x7TYrP1tDmLJB6L9 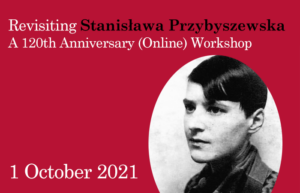 October 2021 will mark the 120th anniversary of Stanisława Przybyszewska’s birth. One of the most original writers of interwar Poland, she remains on the margins of public consciousness, her works drastically underexplored and little read even in her birth country – and worldwide she is rarely recognised as more than a footnote in discussions of Andrzej Wajda’s film Danton or as the “victim of history” from Hilary Mantel’s 2017 Reith lecture.

The aim of this online-workshop is to initiate the change: to draw the attention of Anglophone academia to Stanisława Przybyszewska’s work. First, we want to put Przybyszewska’s name on the intellectual map of the interwar period by facilitating an international dialogue regarding her legacy. Second, we propose to open a discussion on the relevance of her ideas for the present day.

See see details here for a call for papers for a forthcoming workshop at Tallinn University.

As an invited guest speaker, Piret Peiker gave an electronic lecture and seminar for the research group on Politics and Governement at the Public Service University, Budapest, Hungary 16.03.2021.

The paper was entitled ‘Building a Postcolonial State: The Case of the Law on Cultural Autonomy for Ethnic Minorities, Passed in the Estonian Parliament 1925’.

The lecture introduced the historical underpinnings, political imagination and topical debates that shaped the crafting and eventual passing of the law. Drawing upon that, the seminar discussion also focused on the methodology of the approach, and emphasised the relevance of the insights of intellectual history, entangled history, and postcolonial studies for politics and governance in the present world. The seminar was chaired by Prof. Ferenc Hörcher.

Tallinn University has announced its summer school in Transnational Intellectual History, to run between 23-27 July 2021. The course will be run by members of the ERC Between the Times project.

The University of Stavanger is recruiting a full time, fully funded, doctoral researcher to work on ideas of progress in liberal democracy from the 19th century onwards. The doctoral researcher will be working with Dr. Tyson Retz, a past visiting fellow at the Between the Times project. More information is available here:

Henry Mead will give a paper in the Open Philosophy seminar series at Tallinn University on 02.10.20 (Room S-240). Title and Abstract below:

This paper first considers Frank Kermode’s account of modernist apocalyptic thinking in The Sense of an Ending (1967) as a reference point for temporality studies, noting its distinctions between secular chronicity, epiphanic kairos, and intermediate forms identifiable in modern literature. Using this theory as a frame, the paper focuses on T.E. Hulme, whose essays capture a type of modernist ‘clerical scepticism’, as Kermode puts it, in treating assertions about progress or historical crisis as humanly-constructed ‘fictions’. The paper then traces Hulme’s analysis of early 20th century thought, moving from forms of positivist progress to a vitalist perspectivism – and considers his ‘religious attitude’ in his late writing, in relation to Kermode’s categories of ‘myth’ and ‘supreme fiction’.

Henry Mead will present a paper on ‘Modernism, Heresy and Temporalities’ at Tartu University, Jacobi 2-336, on Monday 9 November at 16.15.

The Between the Times project is hosting an event on 14 of February: Vasileios Syros talking about ‘Global intellectual history’.

Vasileios Syros is a senior university lecturer at the University of Jyväskylä, and his scholarship focuses on the interaction among the Christian, Islamic, and Jewish traditions of political thought as well as on cross-cultural encounters in the early modern period. He is the author of Marsilius of Padua at the Intersection of Ancient and Medieval Traditions of Political Thought: University of Toronto Press (2012).
The seminar takes place on Friday, 14.02, at 16.15, room M 328.